Why Machine Learning is not Artificial Intelligence?

It is simple: because ML is only a contributing branch of AI. If we follow Norvig and Russell book -and other authors-, saying that machine learning is part of artificial intelligence is grossly misleading, ML is a contributing discipline of AI, just like search, reasoning, decision making, natural language processing, image recognition, robotics, etc.

For instance, ML by itself cannot be intelligent because lacks reasoning, logic, and doesn’t interact with the environment. ML detects patterns based on statistical analysis of data using math based algorithms. These algorithms are not intelligent per se.

Intelligence is much more than that.

Stating that ML is part of AI dramatically lowers the bar of what John McCarthy meant by AI. Chapter two of the AIAMA (Artificial Intelligence: A Modern Approach) book -which counts five editions- contains examples and schematics of what an AI agent is. In essence, an AI agent perceives its environment by means of sensors, and acts upon the environment through actuators; in between these two, there is logic, reasoning, decision making that makes the agent act autonomously, correcting itself with no human intervention.

The figure is my crude attempt of explaining what the AI contributors are (brown).

The view of AI by Peter Norvig and Stuart Russell (2010) 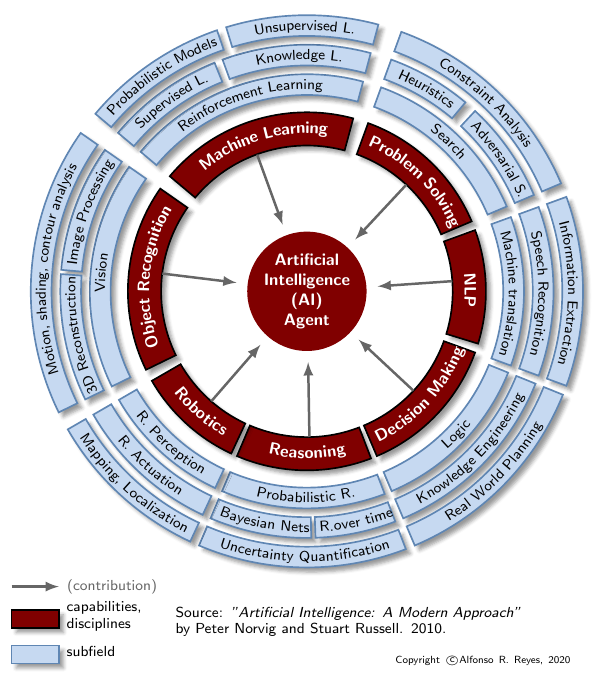 Books on artificial intelligence DO NOT do that. They are written by scientists -generally- with strong ethical codes.

So, today’s Artificial intelligence, Machine Learning, and Data Science atmosphere is charged with false stories, inflated achievements. That’s bad for all of us. Because in the end what we receive is pseudo-science.

Science is hard - it’s supposed to be. Artificial intelligence, at the top of the food chain, was one of the ultimate frontiers. I’m sure John McCarthy would not agree to qualify a linear regression, a neural network, or a bare robot, as being Artificial intelligence. Of course, they could be AI with the right combination of components. Machine Learning is only one of them.

“You are spreading misinformation …”

If I may invite you to read “Artificial Intelligence—The Revolution Hasn’t Happened Yet” by Prof. Michael I. Jordan. With that clarity that comes from a mixed background of engineering and science, Prof. Jordan diagnose the current state of AI. These are my takeaways.

1- Clearly, there is a misunderstanding of the word Artificial Intelligence, not only by the general public but also scientists.

2- It is difficult to grasp the concept of AI because we are living it. But it’s time that universities come up with a career on AI Engineering.

3- Most of the successes we attribute to AI are actually Machine Learning. All technological leading companies use ML throughout all their business; read Google, Netflix, Facebook, Amazon, Twitter, Microsoft, IBM, etc.

4- AI originally was meant to focus on the cognitive capability of humans. After almost 70 years still remains elusive.

5- What we call AI today arose from the fields of pattern recognition, movement control and statistics.

There is also eye opening interview by Lex Friedman to Prof. Jordan in YouTube. Here is the link, whom Lex and Yann LeCun call “the Miles Davis of Machine Learning”.

The view of Artificial Intelligence by Prof. John McCarthy (2007)

It is interesting to note how the personal computer and computerized electronics completely warped the AI landscape. If we compare it to the one by Norvig and Russell, the latter gives way to Robotics, Object Recognition, Machine Learning, and Natural Language Processing.

Professor McCarthy wished he had called the discipline “Computational Intelligence” according to Prof. Noel Sharkey.

It is mind boggling to see Machine Learning, having brought most of the successes that are attributed to AI, public and general and even scientists insist in calling it AI. It is not because of the word “artificial”; we are irremediably fascinated by anything labeled with “intelligence”.

Good part of it is commercialism. 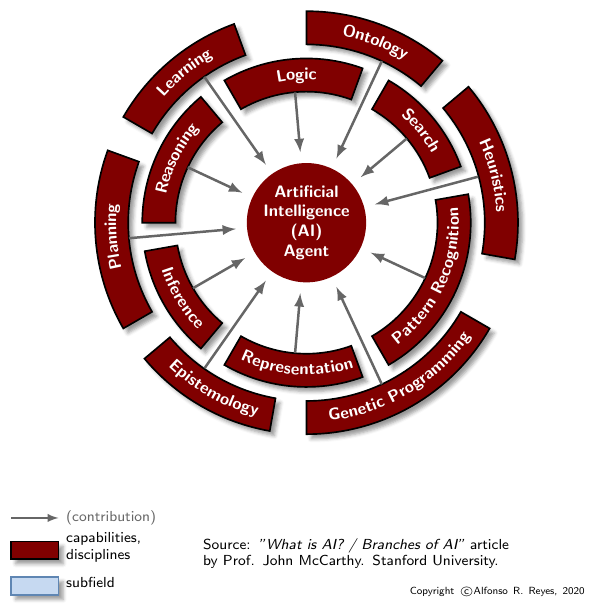 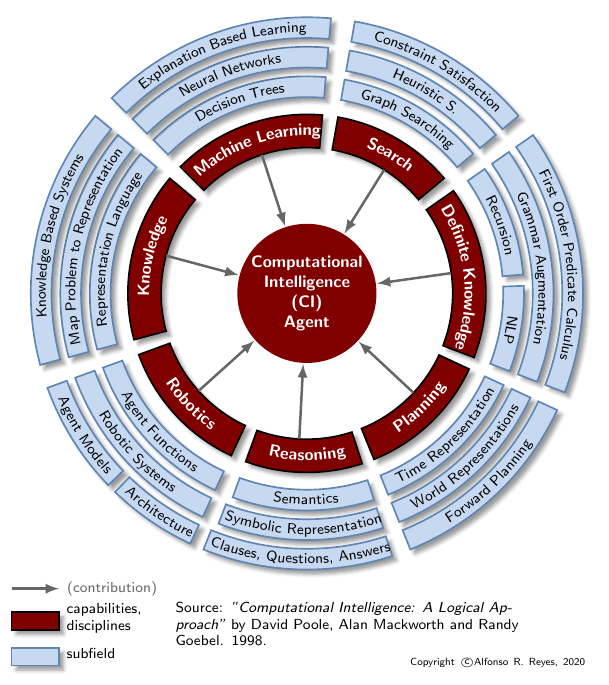 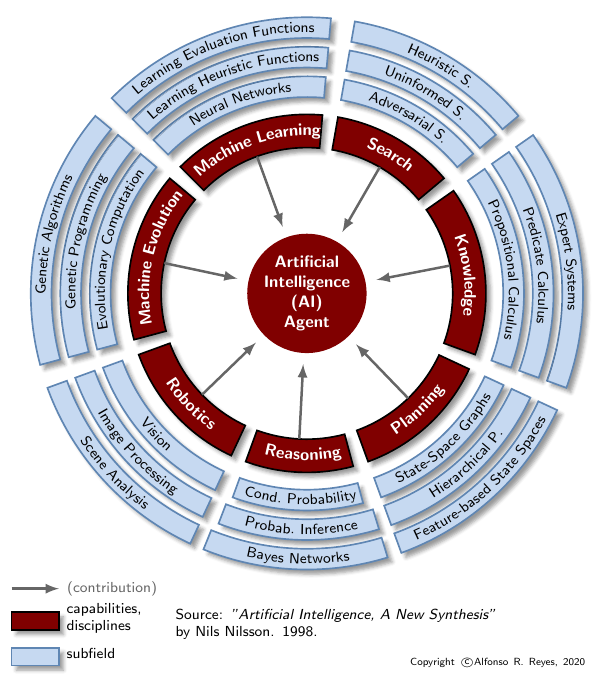 Although Professor Bender classify Artificial Intelligence from the viewpoint of Goals in six groups, the sets two main groups: Goals as Results (Reasoning, Planning, and Learning), and Specific Goals (Robotics, Vision, and Language), he dedicates most of the book to reasoning, search, and learning. See next figure. 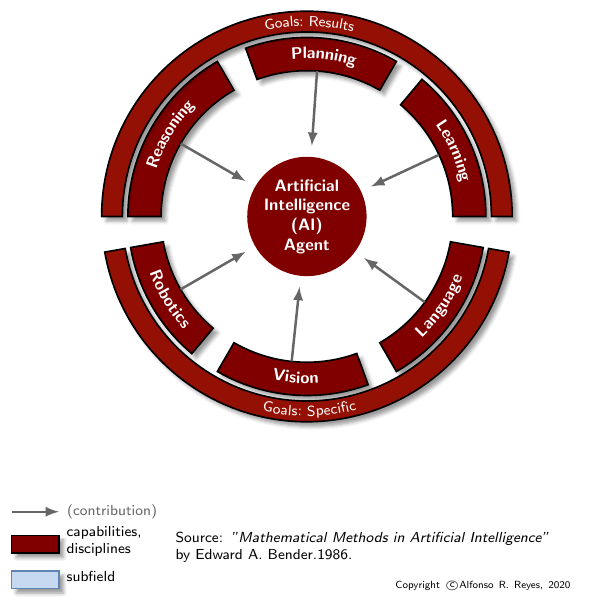 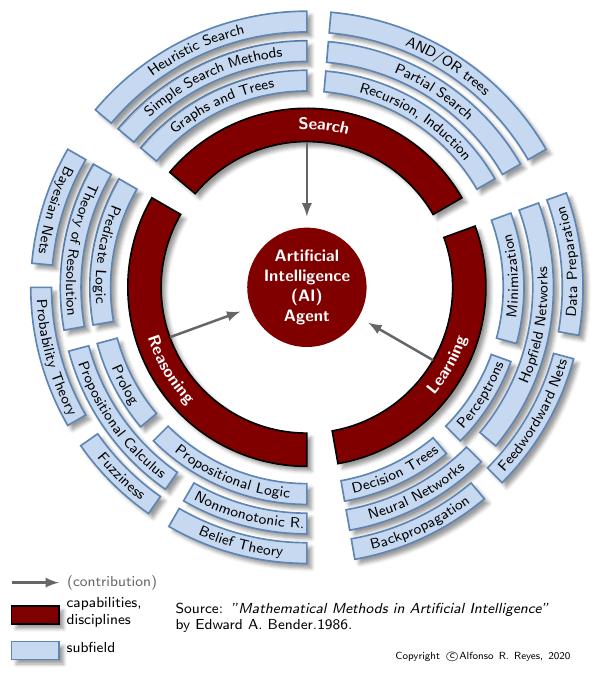